The Summer, 2012 issue of Santa Cruz Style featured a story about a beautiful new Tuscan-style farmhouse in the Corralitos hills that we are pleased to have been a part of.

The 7,200 square foot home featured in the article belongs to Robert Harmann and Denise Danisch, Aptos residents since 1995 and Silicon Valley retirees. 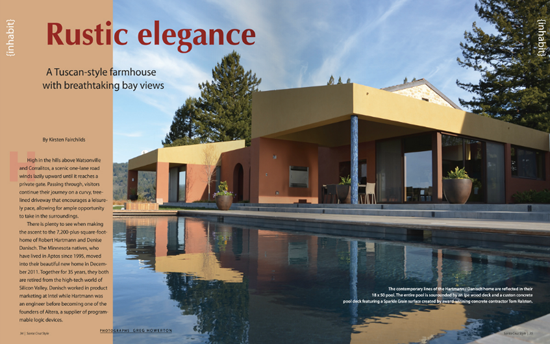 Actively involved in the decision-making, the owners worked with the building team which included New York-based Italian architect, Aldo Andreoli – as well as Los Gatos-based architect Louie Leu, general contractor Greg Howerton of Howerton Construction in Aptos, interior designer Dani Ingle of Home by Design in San Jose, and Long’s Cabinet Co., as well as other fine craftsmen and artisans.

Andreoli has designed projects around the globe. For this project, he combined the influence of his contemporary projects in NYC and Panama with custom homes in Sedona, Arizona to create one of the most unique homes in the Santa Cruz area.

You can read the entire article here.

Long’s Cabinet is very proud to have had the privilege of working with such a talented team.

Provide specifications. If we need more, we'll come to you.

See our work in this Santa Cruz Style featured article…

Don't want to make the drive to meet with us? No problem. We come to you.

Our custom cabinets and custom furniture can be found in some of the finest homes and offices in the San Francisco and Monterey Bay Areas including Santa Cruz, San Jose, Menlo Park, Atherton, Los Altos Hills, Saratoga, Los Gatos, Monterey, Carmel, and more.